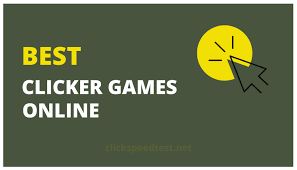 Do you know about the best clicker games online?

A variety of distinctive connotations are associated with the clicker games. This is also known as idle games or incremental games. In most of the cases, there is a snowball effect that is helpful to make the clicks even productive, and hence, it is the incremental moniker. Many games are also there that operate automatically even if you are not playing which justifies the title “Idle Games”.

The games cast you as an enterprising owner looking to make it great in the game of investment. You begin with a lemonade stand and continue with making pizzas, handling hockey teams, making movies, as well as running banks. When you buy each business, then the value increases and it maximizes your profit and the speed of producing goods but it also makes it hard to split the attention across all ventures. Also, you can hire managers to automate each business and it increases money meanwhile you can focus on other areas.

The game fits under the title clicker game as you make money even when someone else is doing the task.

2. Crusaders of the lost idols

The game puts you the leader of a group of fantasy heroes who make their way through the hordes of monsters. You will get gold if you beat an enemy and you can spend the same to earn new Crusaders. It can also increase the level of each character and use that gold to purchase the set of abilities. With your progress, the army will increase and they will capable of giving out something.

The center of the Crusader’s formula is the formations. The big part of maximizing the flow of gold is rearranging your party. If you like clickers with some tricks, then the game is a great choice.

The game allows you to play the role of the ruler of a small kingdom. By simply clicking on your realm, you will earn coins and can spend the same on buildings that automatically generate the income. If you are offline, still the buildings like inns and blacksmiths continue to grab coins for you.

The game categorizes itself in the category of Idle and clicker games as it can pick up either good or evil direction for the kingdom. Selecting any good or evil direction enables you to combine mutually with several races and help you to access unique buildings and upgrades as well. They do not have a re-playability theme and you get locked after you made a choice.

It is where the incremental clickers began as it is synonymous with this genre. You can begin earning with a click on a large cookie and get a single cookie for each click. Bake more and more cookies and you will get enough cookies to buy a new cursor that will click for you. Also, you can hire a grandma to bake cookies for you and upgrade the click’s efficiency.

This game is best suited for you if you are a kind of person to clicking monsters into oblivion. You begin the game with a single warrior and tapping on monsters will give you a single damage point. Later, you can also recruit allies that damage enemies. You have a chance to level up all members with coins as fallen by felled monsters and also, can buy some set of abilities over the time that makes them powerful.

This game s an incremental version of a first-person shooter as Crusaders of the Lost Idols is an RPGs. In this game, you need to click on the cubes that drop currencies. You can use that money to buy new weapons that automatically fire for you. Moreover, you can upgrade each gun to incline the damage of the output and even you can get a chance to buy some abilities that remove loads of damages.

It is a healthier game that works very efficiently. It starts simply by catching a butterfly and start earning coins. Once you have enough coins, then you can buy a carrot patch. Further, gather sufficient carrots if you want to plant a blueberry bush. A combination of enough carrots, as well as blueberries, helps you to plant an apple tree. So, you will get a garden at the end with some tasty fruits and vegetables.

It is a healthier game as compared to cookies clicker. As you will do progress, you can also gain some helpers that will automatically garner ripe crops. You have some scavengers like magpies and rabbits that are looking to snag the labor’s fruits and you need to ward off.

This game is a blend of idle games and the best card games. You gain the coins by putting the cards on the fields and need to save card packs to unlock slots where you will have to place the cards. Different buffs are there on these creature cards such as Ice Sword that provide full production to the card. Moreover, the beer gives three coins for each second.

It stands for Numbers Go Up and it has a hilarious RPG style game that fits you in the shoes of a feeble amnesiac who has finished up in the sewer. Every second generates energy and can be spent on training attacks as well as defensive abilities.

These Idle games have gained popularity and become a cult in recent times. In the background, people play these games when working on making something more productive. These clicker games use the Prestige system that enables a player to restart the game from scratch but with some extra boost to play the game. This is the place where the repetitiveness comes and you begin playing from the very beginning as an experienced player.

The best rewarding systems for players are these idle games and they are easy to play as well as good to return to the game.