Click speed test is an online free AI-based tool accessible to all the users to calculate their clicking speed. Taking up the test assists users in accomplishing maximum mouse clicks in a bounded time.

Gaming addicts can amplify their clicking stamina and boost their gaming skills using CPS test tool. We provide users with plenty of variations from the newbie mode to expert mode, and they can opt for any one of them as per their ease.

Get instant and 100% precise outcomes, aiming at making users efficient at bursting maximum mouse clicks in the allotted time.

The concept of click speed test originated from the Kohi server of Minecraft. It was designed for Hardcore game modes. Numerous people took inspiration from this Kohi server and created online websites and apps to help users check their clicking speed.

These websites eliminate the need to install any mod in Minecraft and make it convenient for gamers to test and analyze their clicks per second rate in a suitable browser.

Why Should You Play the Click Speed Test Game?

The clicks speed test game is developed by keeping in mind the gamers. The various time modes and challenges of this tool assist gamers in achieving a higher clicking pace that enhances their gaming skills.

Users looking to test their mouse-clicking ability and hit maximum clicks in a defined period also play the click speed test game and enjoy its features and benefits. Faster clicking always works in our favor.

Boost Your Gaming Skills with The CPS Test

Can you imagine having an online free tool that aids you in boosting your gaming skills? Users can now intensify their gaming skills effortlessly using the clicks per second test.

Before playing the game, make sure to have a stable internet connection that does not fluctuate. Also, consider the hardware part, ensure whether the keys are working and the mouse is well connected

A default timer of 5 seconds is set beforehand. The players can switch to other time variations from the available options, that is 1 second, 2 seconds,10 seconds, 15 seconds, 30 seconds, 60 seconds, and 100 seconds.

Initiate the game by hitting on CLICK HERE TO START PLAYING button.

Tap the given area with your mouse as quickly as possible in the given timeframe.

As soon as the auto-timer stops ticking, the results will be displayed in an automatic pop message on your screen for analysis. It will showcase the number of clicks made by you and your overall rank.

You can then use the social icons in the popup message to share the results with your friends via social media websites.

Click on the try again button to replay the game and set a new record. Users have the choice to retake the test numerous times.

Why Does Clicking Speed Matter in Minecraft Game

Clicking mouse at a higher speed with utmost accuracy matters a lot when it comes to Minecraft gaming. A player who is efficient at clicking speedily and precisely is the one who aims accurately.

It aids the players in hitting targets and defeating opponents as quickly as they can, giving them an edge over other players and boosting their chances of winning. 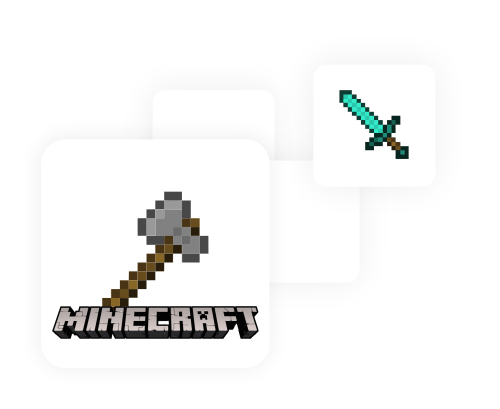 As per the ease, users are open to use any of the various modes available, ranging from 1-second mode to 100 seconds mode.

Find out where you stand among your competitor gamers by knowing your rank via our click speed test. Gamers get placed in different categories ranging from turtle to cheetah rank according to their respective CPS scores.

Any user can easily approach our tool 24/7 for free. It has a safe user interface that eradicates the risk of malware.

The click speed test tool can be accessed on any platform, including Windows, Linux, Mac, iPhone, Android with any other preferred browsers. The test will provide you with the same experience on all of these devices.

Some users may find it hard to access this online click speed test. There are possibilities that the website is down or it is hacked. However, most of the time, hindrance is caused due to blockage from your school or workplace ISP.
Here are some of the ways through which you can play the unblocked version of the click speed test:

Use a VPN to bypass restrictions

A VPN is likely the best and most secure method to unblock websites. It is an apt tool that encrypts your internet traffic and enables you to fake your IP address so that your Internet Service Provider cannot track down your location, allowing you to access restricted websites.

Use an open proxy to unblock websites

A proxy website is the best way to go if you are in a hurry to unblock a website on a public computer. Proxies hide your IP address from workplaces or universities and route the internet traffic through various public servers and addresses. It may not be as fast and secure as a VPN, but proxies are free to utilize and require no installation.

Using a VPN browser extension is a great option when you use public PCs that do not allow you to install a VPN. These extensions unblock any website with ease.

A fast clicking technique introduced by the Minecraft community and accepted by the gamers to level up their clicking ability. Instead of bursting maximum clicks, users in this technique place their fingers over the mouse and tremble their arms to produce hand vibrations for generating massive mouse clicks per second.

Another efficient technique introduced by the Minecraft community is the Kohi click test. It is a technique practiced by many players to boost their scores just by striking the maximum number of clicks in a second. Doing so helps Minecraft gamers to counter down the opponents before they strike you back.

Gaming enthusiasts practice drag clicking methodology where all they need to do is just drag their fingers over the mouse, creating friction to register plenty of mouse clicks in a second.

It is a widely enjoyed and one of the most efficient clicking methodologies. Users in this technique use two fingers alternatively rather than one finger to hit maximum mouse clicks. Practicing this technique routinely provides extensive clicking speed to the players.

Enjoy double benefits within a single test by using the Keyboard CPS test tool. Users can amplify their clicking skills and examine the functioning of their keyboard through this tool. Here the users need to press the keys at a faster pace and observe the corresponding changes indicating the proper functioning of your keyboard. Besides this, users also notice a boost in their clicking accuracy.

The Most Common Term Used in Click Speed Test Game

It is a constructive online tool that tests and analyzes users clicking abilities. In this test, the intensity of your clicking speed is proportional to your cps score.

It is yet another interesting platform that fulfills the needs of the gaming generation. It estimates your clicking pace and accurately measures the click rate in CPS.

Calculate the number of clicks made in one second using the CPS calculator. This tool improves your tapping skills and boosts productivity in online games/workplaces.

This engaging tool counts the number of clicks registered by the users. It does not calculate the CPS rate. Additionally, users are not restricted by a time limit in this challenge.

CPS tracker is an efficient tool that tracks your clicks per second score from beginning to end. Players can readily trace and analyze their improvement.

Click speed tests are divided into four categories according to their CPS score. Newbies and beginners can use the slow and moderate clicking mode to improve their skills, and experts can use the advanced and fast clicking skills.

It is the best mode for newbies because it is the common and slowest way to click in Minecraft. Using this method, players can achieve an average click rate of 2-3 CPS.

Beginners who do not have expertise in tapping skills utilize the moderate clicking mode, where they can score an average of 4-7 clicks per second. This click rate is beneficial and allowers players to have a steady aim while PVPing.

A fast clicker who scores an average click rate of 8-12 CPS utilizes the advanced clicking mode. You do not get too many benefits with this tap pace, but fast clickers typically perform better than experts in Minecraft PvP.

If a player scores 13 CPS or more during the extremely fast clicking test, he is considered an expert. These players do not perform well in Minecraft PvP because their high clicking speed causes their accuracy to be ineffective.

Click speed test apps and games have numerous advantages, such as:

You can consistently practice your spacebar hitting skills with the help of double click test apps and games and readily enhance your clicking abilities.

As you improve your click-per-second speed, you get more chances to win shooting games like Valorant and Apex. The faster you are, the better you can defeat your opponents.

It also acts as a fun and productive way to kill time and burst your stress. Various users feel much more relaxed after playing this game.

On an average, a click rate between 8-10 CPS is considered decent enough.

Although scoring 20 clicks in one second is really difficult, it is possible when you play the game by combining good technique and gaming mouse with regular practice, effort, and willpower.

The world record for the quickest CPS in 1 second is 16 CPS. Challenge yourself to beat it and set a new record!

You can insanely increase your CPS only through consistent practice, hard work, and determination. Also, make sure to have a decent gaming mouse and a stable internet connection.

On average, you can score 12-14 CPS in 10 seconds. Take the challenge now and check your click pace in 10 seconds!

The world record for the CPS test is 22, according to the Clickspeedtest.info website with the latest updates.

A man name Jordan Hum holds the world record for the highest CPS in 5 seconds. He has an incredible score of 14 CPS which equals 70 clicks in 5 seconds.

According to the Record setter website, Dylan Allerd from Las Vegas is a world record holder for the quickest mouse clicks in 20 seconds.

According to experienced gamers, the average CPS is about 6, but it can also be 5 or 7 for some gamers. Some pro gamers can even click ten times in one second. Although it takes time, it's possible with a great technique and a good setup.

Your Rank is Snail!

You Clicked with the speed of CPS

Try Again If You Got Balls